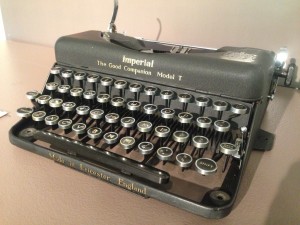 From Lennon to Welles, Hemingway to Rooney, struggling artists of decades past all had one thing in common: they had to get their writing careers started somewhere. And in this particular case, they all started at the keys of a classic typewriter — typewriters that are temporarily on display at the Gallery 360 in the Curry Student Center.

After 1896, when the first Underwood typewriter was manufactured, writers and artists from all over the world went crazy for the new design. Rather than the typewriters of the early 1800s that could only type uppercase letters and weren’t capable of printing on the front of the page (they instead printed on the back of the page using a method called understrike), the typewriters of a new century had everything a writer could want – visible text, logical keys and lower and uppercase letters utilized with a shift key.

With the refining of the typewriter came mass production and cheaper prices, which meant that more people could afford the luxury of printing their own work.

Take Ernest Hemingway, for example, whose 1972 Royal Model P is on display. He used the typewriter during his time in Cuba, when he wrote “The Old Man and the Sea,” a novel that is now considered an American classic.

John Lennon, whose Imperial is on display at the gallery, used his typewriter to write his very first song lyrics when he was a teenager. The Imperial was left at Lennon’s aunt’s home in Liverpool until it was purchased for this collection in 2009.

Steve Soboroff, the parent of a Northeastern student and past CEO of Playa Vista, donated his collection to Northeastern’s gallery until Sept. 25. He will speak Sept. 5 from 4 – 6:30 p.m. with his wife, Patti, about how he came by the typewriters, and his motivation for doing so. This will function as the collection’s east coast debut.

“I love people who are the best at what they do,” Soboroff notes. “The idea that geniuses sat there and accomplished what they accomplished on these typewriters … it gives me chills.”

Other typewriters on display this month belonged to other famous people including Barbara Streisand, Ray Bradbury, Joe DiMaggio, John Updike and the “Unabomber,” Ted Kaczynski.

In addition, Soboroff is also having a Braille typewriter that once belonged to Andrea Bocelli flown over from Italy for the exhibit, as its first public appearance in the US.

Since Gallery 360 is a display unlike most others, the typewriters are actually available for viewers to see, photograph and even touch.

Students and the public can visit the gallery until Sept. 25. The gallery is open Monday-Friday from 10 a.m.-7 p .m. and Saturdays from noon-5 p.m. Typewriters sit on pedestals with descriptions on the walls explaining the importance of each typewriter in the lives of its owner.

As Hemingway said about his writing experience, “there is nothing to writing. All you do is sit down at a typewriter and bleed.”