Picture this: 9,000 condoms, in every color and style, some ribbed, some extra large, some spray painted and all in the name of fashion. FACE AIDS took protection to a whole new level this weekend with its second annual Condom Couture event, which challenged students to design the best dress possible. The catch: designers could only use condoms.

FACE AIDS, the on-campus group fighting for global health and social justice, aimed to increase awareness of safe sex practices while raising money for programs to strengthen the public health system in Rwanda.

“Condom Couture acts as both a fundraiser and an awareness event,” FACE AIDS president and junior biology major Jen Plattel said. “I can’t think of a better way to get people comfortable about safe sex practices than watching dresses created out of condoms walk the runway.”

Middler pharmacy major Francesca Napolitano and sophomore health sciences major Nicole Torchia co-planned the event starting as early as October. The two began looking for performers, collaborating with other student groups and soliciting organizations for expired or damaged condoms in the fall so designers could begin working on the dresses in January.

“As education coordinator of FACE AIDS, I had a large role in the planning of Condom Couture,” Napolitano said. ”It was very stressful – I have never planned such a large fundraiser.”

Models and designers worked together to create dresses that the designer was proud of, but also that the model would be comfortable wearing.

“When the club asked if anyone wanted to model I just shot my hand up,” freshman mechanical engineering major Abbey Titcomb, who designed her dress with Plattel, said. “I mean, when else would you be given the opportunity to model a dress made out of condoms … [Jen and I] immediately started brainstorming a design and decided that it would be so cool if we could make me into a peacock, and that’s what we did.”

Titcomb, whose dress won fan favorite, said that she became interested in the Condom Couture show because of FACE AIDS’ desire for awareness and change.

“I really think raising awareness about HIV/AIDS is extremely important because it’s a cause that is misunderstood by the general public,” Titcomb said. “I mean some people don’t even know the difference between HIV and AIDS, and it’s not because they’re stupid, it’s honestly because they have not been exposed to that information.”

Like Titcomb, freshman behavioral neuroscience major Danielle Hawryluk became involved in Condom Couture to get involved with FACE AIDS. She worked on her dress with club member Jasmine Fu, and their design won first place among the judges, the Sisters of Perpetual Indulgence, a drag group that emceed the event. 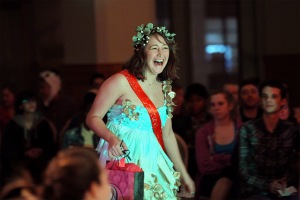 “[The] idea was to try [to] transform the condoms so that they looked as least condom-like [as] possible,” Hawryluk said. “So we unwrapped, unrolled, washed and cut all the condoms so we were just working with pieces [of] latex. Jasmine had the idea to stretch the condoms over wire so they looked like petals that we could assemble into flowers. She also wanted the condoms to be colored, so all the condoms got spray painted and were made to give an ombré effect.”

Apart from the fashion show, the event also featured performer Ajimile and emcees the Sisters of Perpetual Indulgence who presented models and ran trivia. The FACE AIDS president and an NU Pride member also gave presentations about HIV/AIDS and stigma.

“FACE AIDS really is a great organization because it raises awareness about HIV/AIDS along with safe sex and STDs using really fun events,” Titcomb said. “Condom Couture is an amazing opportunity to raise awareness of HIV/AIDS and STDs around campus while still providing a completely unique experience for the audience.”

Through event ticket sales, FACE AIDS raised $859 that will go towards Partners in Health’s programs in Rwanda.

“By creating a safe and fun environment to discuss these issues, we hope to encourage students to continue conversations regarding their sexual health outside of the event,” Plattel said.